From Darwin to Finding Nemo – by Megan Meyers

From Darwin to Finding Nemo – by Megan Meyers

“As a biologist, one of the things that impresses me more than anything else, is biodiversity and pristine habitat. Mostly because there are so few places left that allow me to see both. Darwin (or the father of evolution) set forth on the voyage of the beagle 187 years ago.

I can’t help feeling like being on the Adelaar was a taste of what Darwin must have felt. The landscape was barren in places and lush in others. The flora and fauna were never short of amazing. The sunsets and stars in the middle of the ocean were nothing short of spectacular.

Many people do not know this, but Darwin was sick for most of his five-year voyage on The Beagle. He spent as much time on land as possible. Thankfully for this biologist, the Adelaar was far more luxurious than The Beagle and considerably less pukey than Darwin’s voyage (and yes, that is the scientific word for it).

A major difference between mine and Darwin’s journey is that I was able to spend so much time below the ocean. Scuba diving is one of my true passions. It is one of the reasons I am a marine biologist. When I was little I used to lay in my swimming pool and pretend to be the Little Mermaid. I can’t say much has changed. There are still moments where I find myself under the sea and humming a familiar tune. Especially when I am surrounded by a swirl of colorful fish (which let me tell you, there was no shortage of on this trip).

As a scientist, I have dived in many spots around the world including Moorea, Raja Ampat, New Zealand and Monterey, CA… Komodo is up there with the best of them. The coral is perhaps some of the best I’ve seen in the world and the biodiversity is off the charts.

Komodo is a part of the coral triangle which contains 76% of the world’s coral species. Because of this, it supports more aquatic life than almost anywhere on the planet. I’ll explain it to you like this – you know that scene in finding Nemo when they are swimming over the reef on the way to Nemo’s first day of school? That is what diving this area is like. There were soft corals, hard corals, whip corals, sponges, tunicates, anemones. And that was just what made up the sessile (stationary) community. Beyond that, there were manta rays, barracudas, tunas, sea snakes, mantis shrimps, nudibranchs, eels, and more fish than I could name in one blog post without the reader’s eyes glazing over.

Although charismatic megafauna (i.e. whales, whale sharks, dolphins, etc.) gets the majority of attention, for me, as a biologist, it’s the small organisms that fill the tiny niches in a reef community that are the real stars of the show. These small organisms have amazing adaptations to survive on the reef. One of my favorites is the nudibranch. Nudibranchs are a small slug-like creature with a few unique adaptations. 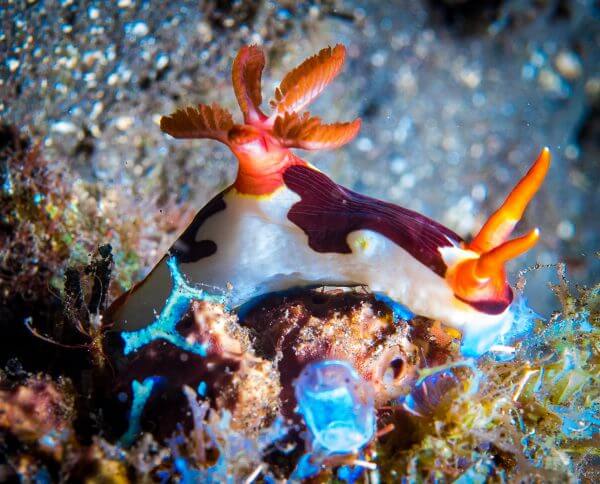 The Indonesian Archipelago is well known for these flamboyant little creatures and they were a real highlight of my travels here. I saw at least 15 different species of nudibranchs. That is not to say that the charismatic mega-fauna does not have its place on the reef. It is because these reef systems are healthy that they are able to support large life such as sharks. This charismatic mega-fauna actually helps protect the smaller species on the reef. In science, we call them ‘umbrella species’ because they act as an umbrella to protect other animals that may not get as much attention (like the 2cm long nudibranchs).

As you may glean from this post, most of the life on a reef serves a purpose and works in harmony together. In unhealthy reef systems, these webs collapse and can be catastrophic to the biodiversity found here. With warming seas, coral bleaching, coral bombing, cyanide fishing and overfishing, reef communities around the world are in danger. Thirty percent of The Great Barrier Reef, the world’s largest barrier reef, has recently suffered a bleaching event due to an extreme heat wave in 2016. And because most corals thrive within a small temperature range, warming seas are of increasing concern. Due to the aquarium trade, a fishing practice known as cyanide fishing is still an issue in many reefs around the world. This type of fishing practice is generally used to stun fish to be collected. However, it also poisons and kills non-target organisms, including coral.

These are only a few problems that coral reefs face. If we want to have places like Komodo to visit in the future, we must be mindful of these issues and careful about the impacts that we have on these important, but fragile communities. My dives in Komodo were some of the best I have yet to experience. As a marine biologist, my role is to protect and ensure not only the survival of these communities. Always by allowing them to flourish with life is paramount. My hope is that people will travel to this area and see what reef life is meant to be and help protect it not only here, but in every ocean.”

Megan Meyers is a marine biologist and a PhD candidate at the University of Western Australia. She works in conjunction with the Australian Institute of Marine Science, on spatial ecology of whale sharks and other pelagics. Megan received her Master’s from the University of Auckland studying whale shark demography and movement ecology in Cenderawasih Bay, Indonesia, in a collaboration with Conservation International. She has been a field researcher, teacher, and naturalist and hopes to be a research professor in the future.

The credit of all the photographs of Megan goes to Rick. Rick McCawley is a photographer, designer and professor of graphic design at Broward College, Ft. Lauderdale, Florida. In 12 years as a staff photographer for the Miami Herald, he got shot at during riots, dived to capture the first photos of the rediscovered treasure ship Nuestra Señora de Atocha, and lived in a trailer photographing the aftermath of Hurricane Andrew (part of the public service Pulitzer Prize team). Click here for his full bio.