Failing to be allowed to travel at the beginning of this spring, I have been offered to bring a little warmth to this blog. Writing about my time as an expatriate is a nice break after a winter punctuated by the waves of the virus!

Bali, March 22, 2017 is when my 4-year tropical adventure begins. Scuba diving? Seen in the documentaries, heard about it from friends, but it never crossed my mind that it would be a thing for me. I start my Indonesian journey in search of new waves to surf. I learned the language “Bahasa Indonesia” hanging out with the locals. And I spent my alone time walking through the rice fields, each more flamboyant than the next.

It was in 2018, during my sister’s visit to Indonesia, that we both learned scuba diving. The setting was fantastic: a small diving school located at the foot of Agung volcano, northeast of the Island of the Gods.

From our first minutes underwater, a new world opened up to me. I am all over again this little girl in awe of The Little Mermaid; but this time in an adult life and breathing through a regulator, compressed air, stored in a tank hung on my back. Since that day, spending time under the surface has become an obsession, which I turned into a profession in order to share it with more people and show them the beauty of the Indonesian seabed.

The liveaboard I work for, Adelaar, brings passionate divers and sea enthusiasts to world famous sites, scattered throughout the Ring of Fire.

The Pacific Ring of Fire is also known as the “circum-Pacific belt” in geography books. It is a term used to refer to the alignment of volcanoes that borders the Pacific Ocean for most of its circumference, approximately 40,000 km. In Indonesia, this belt stretches from the western tip of the island of Java, passing through Bali, Sumbawa, Flores, the Banda Sea and as far as Papua New Guinea. It is also on this axis that we find parts of the Coral Triangle. This region which offers the greatest underwater diversity in the world. 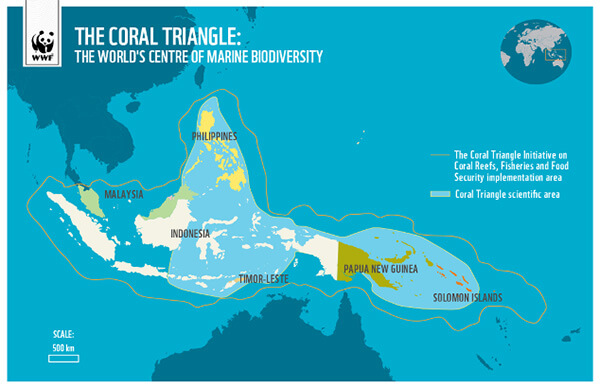 This area only represents 1% of the planet’s surface area, yet it is home to:

That said, great diversity of the seabed, also means a lot of nutrients to meet the needs of coral-reef species. And that said, a lot of nutrients also means strong and powerful currents! A great peculiarity of diving in Indonesia are its currents, just as necessary for biodiversity as they are dangerous. The Komodo National Park (classified as a UNESCO World Heritage Site) is a good example. This place remains in my memory one of the most beautiful places on earth. Both underwater and above the surface, were breath-taking sceneries. The Park is not only home to the famous “Komodo dragons”, but also to 6 of the 7 species of sea turtles as well as an impressive density of reef fish.

Among the “star” species that I have encountered during my numerous dives in Indonesian waters, sharks and manta rays are animals that particularly caught my attention.

Black and white tip reef sharks inhabit the seabed and every encounter with them is just as surprising as it is intriguing. They have this ability to pass very close to you without even looking at you, as if you were only part of the scenery. I also had the chance to observe a thresher shark, a guitar shark, leopard sharks and this bizarre shark called “Wobbegong”. A juvenile whale shark also appeared while my eyes were caught on a tiny nudibranch. The rays of the sun through the crystal-clear water were temporarily interrupted by this big baby. A whale shark of 4 or 5 meters long, slowly passing above me.

Manta rays, whether reef ones, or oceanic, look straight out of a sci-fi movie. They are often observed on “cleaning stations”, places chosen by the giants to get rid of their parasites. Wrasses also find their value there because they peck their food more easily on their wings. Manta rays are curious, particularly intelligent beings with whom it is possible to interact. My best memory around them is about a year ago, when I last dived at the Mawan site. Indonesia was in the process of closing borders, announcing lock-down, and Komodo National Park was deserted. We had the chance to dive in a calm environment, where animals somehow, re-populated this already thriving area.

It only took a few minutes, descending to a depth of 20 meters, to see the dancers approaching us. The Manta rays slowly started to play with the fine bubbles that escaped from our regulators. I was spellbound, hypnotized by their grandeur, their delicacy, their fragility… 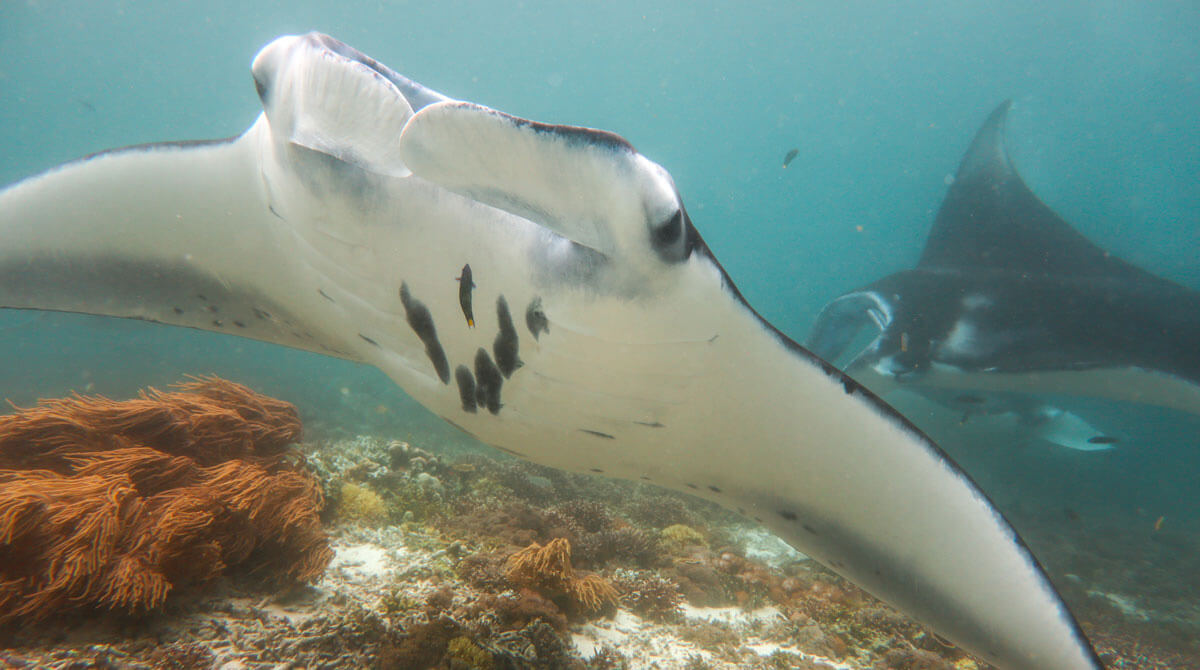 Although diving tourism is developing rapidly in Indonesia, divers are generally passionate about the ocean first and foremost. They pay particular attention to the protection of this heritage essential to the balance of our ecosystem.

I invite all individuals who share our passion for the sea: amateur fishermen, sailors, spearfishing divers… And anyone who is willing to learn, to try scuba diving. Take a look beneath the surface of our oceans: an experience necessary to the understanding the world we live in.